It's Just Bits or Why TV is Dead 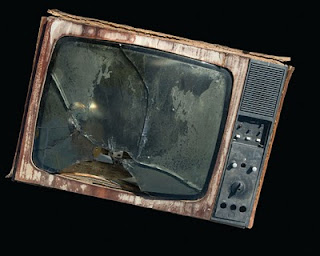 TV is Dead tells why the Net rules, something I have discovered first hand when doing video and uploading same to Vimeo,  an excellent resource for people like me who know enough about video to be dangerous but not enough to be a pro. As designer and web developer, I know quite a bit about systems and standards and also know the key to anything digital is to know how bits can be manipulated and to what device said bits can be processed and, in the case of video, displayed. What D. Eric Franks says is correct, hardware, outside of cameras, is becoming less important, something I have been waiting to happen for years as TV displays and computer displays historically don't play well together because of the curse of non-square pixels, the bain of anyone having to do any kind of video or design work intended to work on both platforms. Another interesting part of the article centers on resolution and software capability as 4K will be the standard for video and stills and video software will be an almagam of moving CG and real time manipulation of video.  This is indeed good news for designers like yours truly.
The history of camera technology, for example, reveals a direct and unmistakable future: SD to HD to 4K; smaller sensors to larger ones; film to tape to Flash memory; expensive to, well, less expensive; 4:3 to 16:9 to...cinematic aspect ratios.
The End of Standards
The first technical transformation that we've already seen is that the Dark Art of television broadcast standards, NTSC, ATSC, DLT to glass masters and other voodoo specs are history. Today, as we move forward through 2010, it's all irrelevant. Physical distribution and the Age of Standards are dead. Sure, we still have some constraints, but think about it: you can upload your movie at 640x480 or 1080p or in a long narrow strip 1,000 pixels wide by 300 pixels tall if you want. The best format for your production today...is the one that you chose.
While I provocatively opened this piece announcing the Death of Distribution as we know it, the sober truth is that the internet has already killed television and Blu-ray. Why would you want to wait until Tuesday night at 8pm to watch your favorite show, when you can watch it anytime after the release date? Why would you even bother to DVR a local copy of a show if you could just access it anytime you want from Hulu?
Ironically, one primary driving engine for all of this was Carousel, the predecessor to Adobe Acrobat, a collaboration between Apple and Adobe to enable accurate & transparent distribution of documents using Display Postscript as imaging model, a resolution independent technology not dependent on hardware display capabilities, something akin to what is happening today in the land of digital video and the net.
The Medial Merge is the new graphic reality, never to be turned off again.
By Remoran - May 26, 2010

The best of both worlds ...

Yours truly has often thought about Brave New World and 1984 as the first used soma and eugenics to sculpt a world most pleasant to behold ...