BRT doesn't discuss politics to any great extent but when it comes to Syria and the potential for catastrophic disaster by committing unilateral military action against a country who poses no threat to the US requires that something must be said and Putin does this in very direct fashion by demanding absolute proof as to who actually gassed the Syrian civilians on August 21, 2013. Additionally, Putin's response is also a wake up call to Obama as this unnecessary and very dangerous gamesmanship he is playing regarding Russia, who's vital national interest is irrevocably connected to Syria, is not Libya, Iraq or Afghanistan by any stretch of the imagination.

MOSCOW - Russia will be sending an anti-submarine ship and a missile cruiser to the Mediterranean "over the next few days" as the West prepares for possible strikes against Syria, the Interfax news agency says.

“We strongly urge you to consult and receive authorization from Congress before ordering the use of U.S. military force in Syria. Your responsibility to do so is prescribed in the Constitution and the War Powers Resolution of 1973.

“While the Founders wisely gave the Office of the President the authority to act in emergencies, they foresaw the need to ensure public debate – and the active engagement of Congress – prior to committing U.S. military assets. Engaging our military in Syria when no direct threat to the United States exists and without prior congressional authorization would violate the separation of powers that is clearly delineated in the Constitution.”

Samsara - A Film for the Ages

Two years ago, BRT showed the preview of Samsara, an absolutely astounding film
depicting the state of humanity circa 2011. Here is another.
By Remoran - August 31, 2013 No comments:

What is quality? Can it be quantified, can it be defined or is it a notion requiring one to have the prerequisite intelligence, education and empathy to truly understand this most elusive concept known as quality. To this end, Chanticleer represents quality, quality in terms of how gardens should connect with nature, something organic, beautiful and inviting to experience, something this video hopefully captured during a walk through this truly enchanted place. Enjoy.

To learn more about quality, Robert Pirsig's Lila is a good place to start.

Quantum computers, the tech that not only presages hardware faster then one can possibly imagine is also a tech able to mirror reality itself. Check out PHD's terrific piece showing how these insane systems work. You will be amazed.

Fukushima, the nuclear disaster from hell, is

Kyodo reports that 300 tons of radioactive water have leaked from a 1,000 ton tank at the Fukushima Daiichi nuclear power plant. That led Japan’s Nuclear Regulation Authority to consider raising the incident from a Level 1 nuclear event to a Level 3 (a “serious incident” with radioactive exposure 10 times the limit for workers) on the International Nuclear Event Scale, the first time an incident has been serious enough to be reported on the INES scale. The most extreme nuclear events on the scale are considered Level 7, a level only reached by Fukushima in 2011 and Chernobyl.

To see how this disaster happened requires only a glimpse into the enormous power of the tsunami that overwhelmed one of the largest nuclear facilities in the world. With this in mind, check out the latest news regarding contaminated water and how it's spilling into the Pacific, a situation not good by any stretch of the imagination. 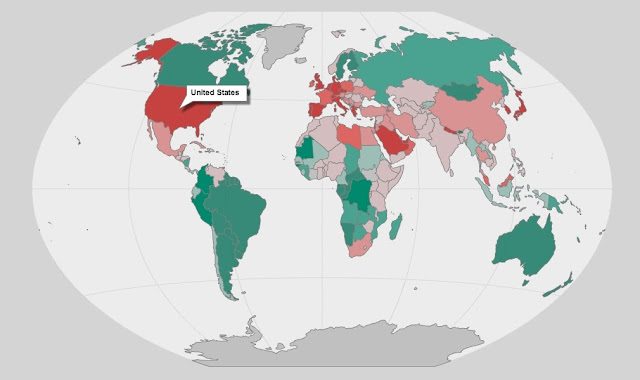 Now that we know what overshoot means, we can now examine the ecological limits of planet earth.

While economies, populations and resource demands grow, the size of Earth remains the same. Since the 1970s, when global ecological overshoot became a reality, we have been drawing down the biosphere's principal rather than living off its annual interest. To support our demands on nature, we have been liquidating resource stocks and allowing carbon dioxide to accumulate in the atmosphere.


Sound familiar? Overshoot Day has been advancing approximately three days a year yet is it? When BRT posted Overshoot on Sunday, September 25, 2011, the day was September 27. It's now August 20 so the 3 days per year estimate has been past by and then some. From this perspective, it seems mankind is committing slow motion suicide by plundering the planet for profit and keeping the status quo in power at all costs, something disastrous from the get go but we already know that, right?

Check out the video below, needless to say, it makes one think about what the hell are we doing to the place "we call home."


Addendum: Check out Climate Change 2007 to learn why this data should alarm every thinking person on the planet regarding what the future portends if we do nothing about it.

Persistence and patience are the two essentials nature's creatures live by in making a living in an unforgiving yet beautiful place called reality. Enjoy and...check out the convergent evolution of the hawk-moth and hummers. Interesting to say the least.

HC & IT - Where complexity rules

Yours truly is working on a project with direct relevance to healthcare, the incredibly complex and inefficient system America is burdened with, something IT, if properly applied, can help but only if a restart is done at fundamental levels to move HC into the 21st century where competition rules and the software in question is open sourced and able to scale, using the net as prime enabler. This terrific graphic shows the inherent complexity of healthcare and how IT intersects with it. Check it out, it's worth the time it takes to view this graphic in depth in order to better understand a system needing a reset and then some.

Seen below is the info-graphic depicting how Big Data intersects with HC. Worthwhile to the max.

A must see about why Texting can kill. Werner Herzog's heartfelt and powerful documentary should be mandatory viewing in high schools and college to get young drivers wise to the fact Texting can kill.

Yours truly loves maps, especially ones showing really interesting factoids like the gems seen in Twistedsifter.com. Check out the 40 on their site and be amazed at how these top picks will help you "make sense of the world". :) 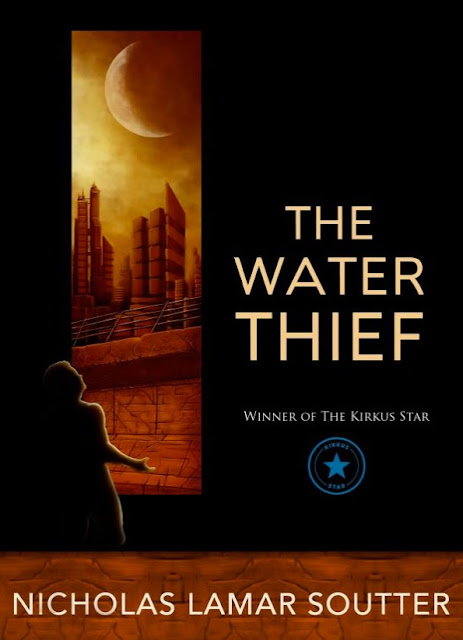 Just finished a really good book titled The Water Thief, the corporate version of 1984, a cautionary tale describing what the impact would be if unbridled capitalism ruled the world.

“But when I saw the price of water I nearly choked. In the last hour it had gone up tenfold. Buying some more information, I learned that there had been an attack, this time at a water treatment facility in Brookhurst. A corporation from a competing Karitzu paid a mercenary firm to blow it up, and raw sewage was now spilling into the aquifer.
My God! Did this happen before my shower? What about the toilet? Christ, I may have just blown six hundred caps on a single flush!
Hell, for the next few hours I couldn’t even afford to wash my hands.”

She sighed. "Compared to people now, yeah, I think they were happy. Republics caused problems too, but for the most part they were an impartial third party that protected people. They had laws-rules nobody could break no matter how much money you had and a system to enforce those laws. And people did cheat the system, but enough power was left to the public that you couldn't leverage the whole thing. At least that was the theory of it all."

If you can stand it, check out this masterpiece of The Hammer doing dance steps in Dancing With The Stars circa 2009, something to behold considering just how powerful and corrupt  Tom DeLay truly was in his heyday as GOP House Majority Leader from 2003 - 2005 but he's not alone, not by a long shot as seen in a polemic by Frank Rich titled The Stench on the Potomac.

This crowd is as intractable as it is incorrigible. There are no term limits, because Washington amnesia perennially wipes the slate clean. No one seems to remember anymore the furor kicked off by a 1998 Post "Style"-section piece in which Beltway grandees like David Broder and Cokie Roberts vented to Sally Quinn about how the impeached president had trashed their pristine city. "Regardless of whether his fortunes improve," Quinn concluded, "Bill Clinton has essentially lost the Washington Establishment for good." Well, that was then, and this is now. As This Town makes clear, these days Clinton alumni are the Washington Establishment, whether in the Obama administration or on K Street, and they can hardly wait for the greater dividends that will accrue should the former First Couple be restored to the White House in 2016. If that happens, Leibovich will not have to write a sequel, because it is already writing itself. 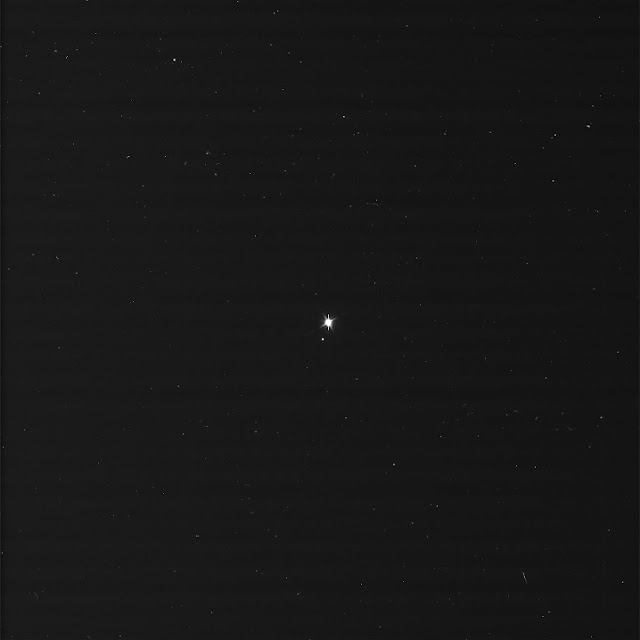 1100, to yours truly, is a large number, particularly when it comes to articles written for BRT. It astounds me to no end that this blog contains this much material, hopefully most of which is relevant and has value. One can only hope.

The 1000th article, titled 1000 & Counting,  was reached on Jan 10, 2013 with emphasis given to quality of thought and the importance of Homer, the blind poet who started it all for aspiring writers willing to expose their thoughts to the public in a form able to be understood by anyone who had the skill set to do so. With this in mind, what has transpired in the 8 short months BRT went from article 1000 to post 1100?
The image above is the Earth, Moon and Sun as seen from Cassini as I feel it's important to get a true sense of perspective as to where we really stand in this part of a vast, unknowable reality in which we inhabit, something we really need to think about if we want to succeed as a viable species on a tiny speck of real estate that, as Carl Sagan once said, "we call Home". 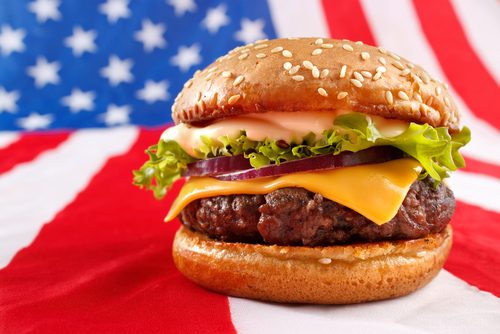 Salon's take on the foibles of the US titled 8 appalling ways America leads the world is, without doubt, a must read.

People uninterested in change and progress tend to cling to the jingoistic fantasy that America is an exceptional country. Often this implies that the U.S. is somehow superior to other nations. Some, like the neocons, have taken the idea of exceptionalism to mean that America should be above the law and that other countries should be remade in our image. Others, like conservative evangelicals, believe that America’s supposed exceptionalism is God’s will.

In recent decades, America has indeed pulled ahead of the global pack in a number of areas. But they aren’t necessarily things to go waving the flag over or thanking Jehovah.

As a side note, yours truly recently visited friends in Quebec. Needless to say, diet, life style and the lack of fat people walking around town, is simply astounding, something America needs to fix, along with the other 7 factoids as seen in this truly informative article.

The shore of Lake Powell in Page, Ariz. Along with Lake Mead, it provides water and electricity for Arizona, Nevada and Southern Californi... 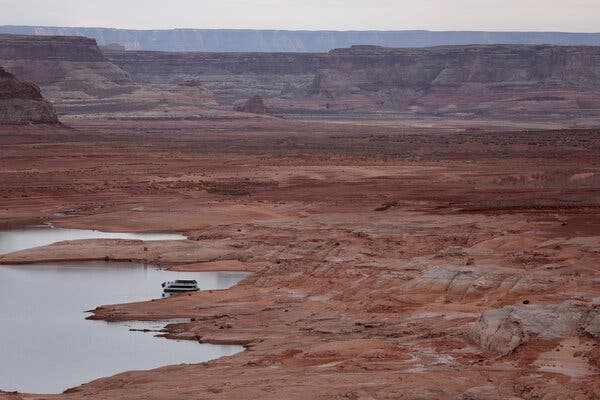